Your Mailbox Is About to Get a Whole Lot Smarter.

Have you ever missed a delivery, had one of your packages stolen, or maybe even wanted to watch your breakfast burrito be delivered to you in just a few minutes by a drone? Dronedek plans to deliver on these desires and more starting in early 2022 alongside The People’s Network with the “Mailbox of the Future:” A platform-agnostic smart mailbox designed to consolidate all deliveries to one secure and connected point.

Dronedek Chairman & CEO, Dan O’Toole, is among the first individuals in the United States to secure patents for a smart mailbox designed for secure drone delivery. In doing so, O’Toole beat out Amazon, UPS, and the USPS by only a number of days. Needless to say, Dronedek is on the cutting edge of future innovations with its imminent smart mailbox technology.

Besides security, Dronedek smart mailboxes will benefit users by providing:

Since its inception, Dronedek has raised over $5.5+ million in angel investments and crowdfunding to support its smart mailbox product launches set for early 2022. Use cases for smart mailboxes are understandably inexhaustible, ranging from residential customers to business parks and campuses (medical, universities, etc) to defense and beyond.

These customers are backed by early research which shows that:

4 Benefits to Write Home About

For these users, Dronedek plans to solve critical package delivery challenges while also offering added benefits such as:

Beginning with product release in early 2022, Dronedek’s launch will expand the reach of The People’s Network and further revolutionize the landscape of IoT. With the potential for over 160+ million Dronedek units in the US alone, you might just start seeing smart mailboxes pop up in towns and cities near you.

Helium compatibility also translates to Network utilization in millions of homes across the United States. The best part? That figure doesn’t include international consumers waiting to be added to the network as Dronedek secures its pending patents worldwide. If approved, the installed units would likely exceed a global addressable market in the billions!

Those who have already been lucky enough to witness a Dronedek demonstration felt enthralled by the wow factor of watching a drone delivering hot wings, sandwiches, and more. If you’d like to see how fast the future of secure drone delivery is developing alongside the smart mailbox, be sure to visit dronedek.com and follow Dronedek on social media to stay tuned for updates. 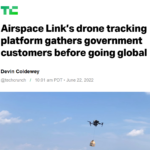