INDIANAPOLIS – June 01, 2021 – A group of beautiful, smart and gifted but misguided youths are financing their futures by stealing expensive rims and audio systems from high-end automobiles in a movie currently in production.

They’re cutting-edge criminals, and early adopters of technology big and small, which makes perfect sense that their online purchases are delivered by drone to a DRONEDEK mailbox .

“This movie is going to feature scenes with a DRONEDEK mailbox in them as if it’s a routine delivery option,” said Dan O’Toole, DRONEDEK Founder and CEO. “In the very near future, when drone package delivery really is routine, people are going to say they saw it first on Charge it to the Game.”

DRONEDEK will take delivery next month of its first smart mailbox prototype and nearly immediately allow it to be used by the movie production team in Atlanta.

“We’re excited to show it off,” O’Toole said. “But we thought having it immortalized in what looks to be a great movie, was worth a little bit of a delay in our demonstration project.”

DRONEDEK, which is among the first companies to patent a high-tech mailbox designed for secure drone delivery, expects to begin installing its mailboxes in central Indiana this summer for commercial and residential customers. Beyond efficient and inexpensive delivery, package security is also a concern as more than 1.7 million traditionally-delivered packages are stolen from American doorsteps, which amounts to $25 million a day in lost goods and services every day.

Charge it to the Game is expected to be streamed later this year. Directed and produced by Eddie Beverly, Jr., the action-packed movie features well-known social influencers, budding actors and models in what for some of them is their first feature film. The cast includes Masika Kalysha, Pretty Boi Ballo, Josiah G, Taylor Schwartz, Dominic Lee, and Corey Campbell. See the full cast here.

About DRONEDEK: DRONEDEK’s smart mailbox enables customers to fully automate their delivery process for the last mile. See the mailbox and learn more at DRONEDEK.com 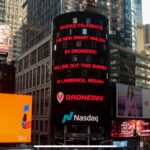