The future of drone delivery captivates our imaginations. You might visualize a future where you can place a mobile order and be tracked through your phone’s GPS to enable a drone to find you wherever you are, bringing your food, medicine, or change of clothes to your doorstep and beyond.

But in this imagining, there are many practical considerations it’s easy to daydream right past. Does the drone have to land someplace to make the delivery? What if someone intercepts your package and takes the item for themselves? And if everyone is using this service, how are all these drones going to fly through the same airspace without chaos?

These are just some of the factors that play into the answer to the questions of whether drone delivery will ever be truly feasible on a large scale. At DRONEDEK, we not only want to talk about these challenges, but create solutions that help humanity fully actualize the potential of drone delivery service. Let’s review the challenges to drone delivery and what is happening to help overcome them.

There are several drone delivery risks that are widely recognized as needing to be solved. The main ones include:

But the good news is, experts across the world are hard at work thinking about these challenges and planning the innovations to overcome them.

The Federal Aviation Administration has established Part 135 certification as the pathway for drone carriers to be allowed to make deliveries for compensation beyond visual line-of-sight. There are five phases of the certification process, and it is worth noting that the drones must still always be controlled by a human operator. The level of certification that is granted to the drone provider dictates how many drones they can have in the fleet, as well as how many pilots and second-in-command pilots they can involve in the operation.

In addition to these specific rules about using drones for commercial deliveries of property, there are other more general regulations about drone operation in the US. From recreational users to educators, rules about unmanned aircraft systems include not being allowed to operate the drone above a person or moving vehicle, not allowing the drone to leave your line of sight, restrictions on how high the drone can go, and many others.

Drone deliveries require many exceptions to these general regulations, which is why they have been slow to actually roll out. There are specific cities and states in the US where drone deliveries are part of broader drone testing initiatives taking place already, including Reno, Nevada; San Diego, California; certain counties in Florida and Tennessee; and states including Virginia, the Carolinas, and Kansas.

How Fast is Drone Delivery?

Commercial delivery drones that are in use in other nations fly anywhere from 50-60 miles per hour. In theory that means they could deliver a package very quickly, but there are also considerations of how long the drone remains charged. The last thing a drone carrier wants is to leave both a package and a drone that can’t fly back because it needs a fresh battery on your doorstep! Plus, there are the concerns of shared air traffic space we mentioned earlier. In theory every airline flight would be a lot faster if you didn’t have to wait for clearance to depart and land, but to keep everyone safe and efficient, that isn’t the way it works. For the same reason, it’s possible drone deliveries will need scheduling and approval before the aircraft can depart.

How Far Can a Delivery Drone Fly?

The same concerns of battery life that impact speed also impact how far a delivery drone can fly. For instance, Amazon’s delivery drones can only fly a total of 15 miles before they need a recharge. That means 7.5 miles is the furthest they can go if they want to make the return trip, too. So what does this mean for the future of delivery drones? It’s possible that the USPS or private carriers like UPS and FedEx will work with retailers to use drones, or establish their own drone fleets. A driver could use a drone to deliver packages all across a neighborhood, while staying parked in one place and keeping a recharge station in their truck. And, over time, one expects the battery life of the drones will get longer as well.

How Much Weight Can a Delivery Drone Carry?

The weight a drone can carry is referred to as its “payload.” The average payload for a small drone like the ones being prototyped by Amazon can carry packages weighing up to five pounds. But industrial drones used in filming movies and television shows, or by the military, can carry upwards of 400 pounds. The amount of weight a drone can carry is impacted by its size and number of propellers. While the air traffic concerns and safety concerns surrounding drone deliveries mean these larger aircraft may not be used for drone deliveries out the gate, there is always the potential that larger deliveries could be made by drones once the logistics are in place. The drone technology already exists—it’s just the question of infrastructure rising to meet it.

With the limits of range, weight, and usability that exist for delivery drones, food items from a local grocery or restaurant may end up being a great way for drones to be used. UberEats plans to use drones to deliver food from different restaurants to a central drop-off point, where a human driver will pick up individual orders and take them the rest of the way. The same idea could be used for grocery delivery services, to make the delivery chain faster. Still, due to all the other factors we’ve discussed, the days of a drone hovering outside your bedroom window with your tasty takeout are still in the far future.

What Will Consumers Need to Receive Drone Delivery?

Drone delivery is not only feasible, it’s already happening in many circumstances. But this fledgling industry is still figuring out the best and most innovative ways to actually deliver value to the consumer. DRONEDEK is getting directly involved with the development of our patented smart and secure drone delivery receptacle. Equipped with a sensor, our drone mailbox immediately detects the arrival of the delivery and stores your package in a secure interior. A one-way mail slot even allows for traditional mail to be just as secure.

It’s our mission to build a better mailbox that helps common consumers make the most of emerging technologies. We invite you to learn more about DRONEDEK and even place your pre-order today! 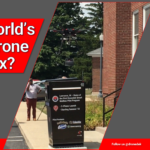