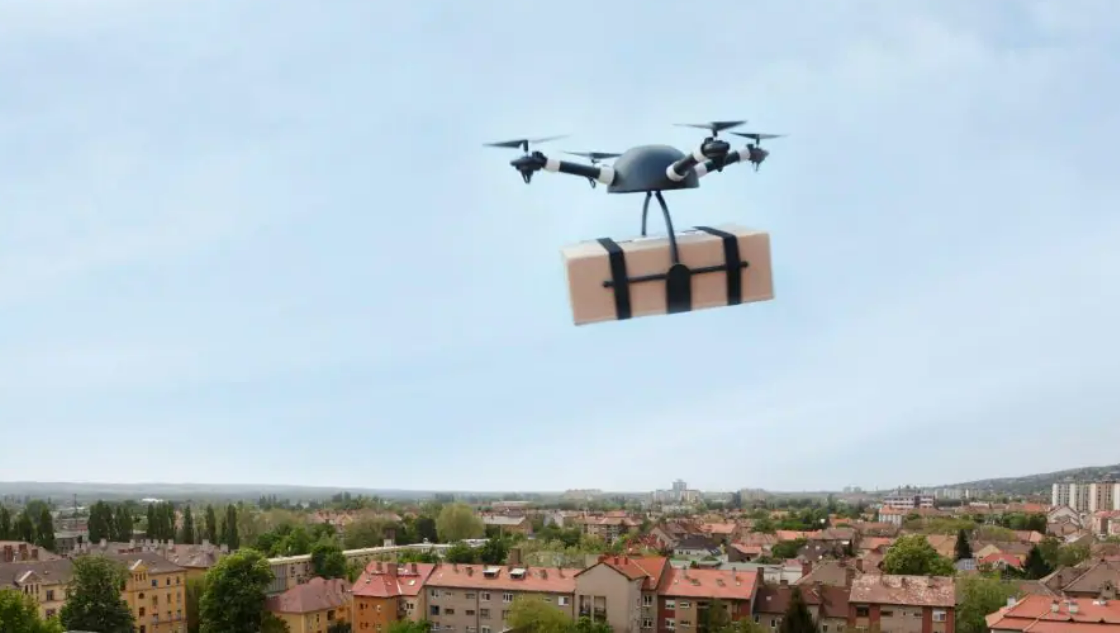 We may not have George Jetson’s flying car quite yet, but we could soon be getting a significant amount of our deliveries by drone if Amazon and Chili’s have their way.

Amazon has been talking up delivery by drone for at least six years while Chili’s is promoting the idea of delivering items like milk shakes to customers within 5 minutes.

Is that 5-minute window realistic?

“Sure, if your house is next door to the restaurant,” robopsychologist Tim Lynch, president of Psychsoftpc, told The Food Institute. “While drones can take a direct route to a destination and avoid streets and turns needed by cars, they don’t instantly appear at the destination. Delivery time will be shorter than a person in a car, but it will still take time.”

James Leslie, a senior sales engineer for Anra Technologies, developer of the SmartSkies Mission Manager drone operations solution, added battery power also may be an issue, as well as the need to gain approval for beyond visual line of sight drone operations.

In 2019, Amazon unveiled a drone that can fly 15 miles and deliver packages of less than five pounds to customers in less than 30 minutes. The device can take off and land like a helicopter and is designed aerodynamically, like an airplane, the company said.

COSTLY FLIGHTS
Business Insider (April 7) reported that leaked company documents indicate Amazon is planning to deliver 1 million packages through its Prime Air service by 2025 at a cost of $63 per package, compared to $5.50 per package for its current delivery methods.

Amazon plans to roll out the service to 1,300 shoppers in Lockeford, California, and College Station, Texas, this fall, the Insider reported. Everything from beauty products to pharmaceuticals will be available. The company hopes for 12,000 test flights before Jan. 1 to enable it to obtain approval from the Federal Aviation Administration.

FedEx is testing a hybrid-electric drone from Elroy Air that can go about 300 miles. The craft has a wingspan of 28 feet and can take off vertically. Retail Brew reported the company envisions shuttling packages as heavy as 500 pounds between sorting hubs.

Walmart, which began testing drone delivery in 2015, also is working with Zipline in Pea Ridge, Arkansas, The Verge reported (Nov. 18). The service covers a 50-mile radius. The giant retailer is hoping to use drones to eliminate gaps in its delivery network.

FLIGHT PLANS
The Food Institute asked tech experts how they expect the nascent delivery method to develop in the next five years.

Leslie said he expects drone traffic to be monitored by ground control stations and the aircraft themselves will be equipped with collision avoidance systems.

Retail, he said, is just an afterthought.

“Drone delivery will be most useful for hospital, emergency services and industries that rely on helicopter services like oil and gas and renewables offshore. This will be especially beneficial in difficult-to-reach areas that are not easily accessible by traditional methods of transportation,” he said.

Scott Moses, head of the grocery, pharmacy and restaurants group at investment bank Solomon Partners, said he sees drone delivery becoming “part of the rapidly evolving online grocery tapestry in the next few years. Amazon, Walmart and Kroger have all made material investments in the technology.”