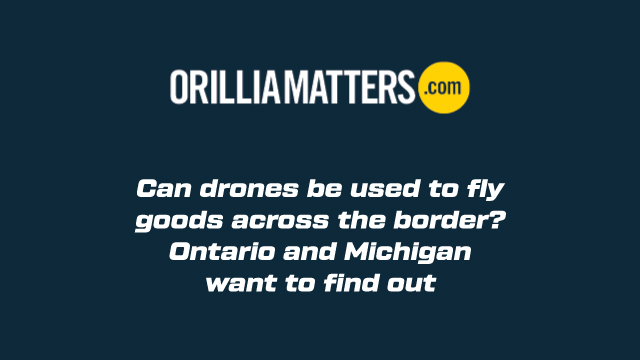 Ontario and Michigan will be working together to explore whether small drones can be flown beyond the line of sight of a pilot and be used for cross-border transportation of goods, medical transport and other small-scale deployment of unmanned aerial systems.

A feasibility study is expected to be completed by late summer or early fall of this year, says Bryan Budds, deputy administrator for the Michigan Department of Transportation’s office of aeronautics.

“It really runs the spectrum of small package delivery to potentially larger hauls as well,” Budds said this week.

Budds says that in order to facilitate a commercial expansion of drone technology – the feasibility of a commercial drone skyway will also be explored as part of the study – there needs to be a look at what sort of infrastructure is needed to support that technology.

Budds is also excited about exploring the possibilities of delivering packages to homes with the use of drones. He says that business cases are being developed now where delivery companies are pitching the deployment of drones from a central area of a particular neighbourhood.

“Especially in today’s day and age, there’s a lot of interest in the emergency medical type discussion – so for folks that maybe have limited mobility that can’t get around as easily, there are good opportunities for things like prescription delivery potentially,” said Budds.

“A hot topic today is COVID tests and things like that. Is there an opportunity for this technology to support those sorts of movements of goods and services as well?”

Budds believes the feasibility study could also open up discussions around alleviating supply chain issues witnessed during the COVID-19 pandemic.

“Is there an opportunity for some trade-offs there if we move some of those things to the sky in the future concept?” he said. “What sort of offsets do you see on the rail system, on the port system, around the highway system – and that’s one of the big things that we’re going to study through this work too, is what those offsets might look like between the different modes of transportation.”

The Ontario Vehicle Innovation Network (OVIN) will participate in the feasibility study on behalf of the Ontario government.

OVIN head Raed Kadri says the role of the OVIN is to support Ontario companies to commercialize new solutions and get them into the global market, and to make sure those technologies are being piloted and tested in Ontario.

Kadri says drone technology presents a “very large opportunity” for the province. In 2020, the two-way trade of goods between Michigan and Ontario was valued at $60.1 billion CDN.

“Our two jurisdictions are great trade partners, our proximity is very close. It only makes sense that we look at where there’s strategic opportunities for us to work together,” said Kadri.

“When we talk about looking forward into the future and how we may move goods in the future, drones is one of the things that everybody’s kind of top of mind, trying to better understand how drones can be used,” Kadri explained.

“Our role for OVIN is to coordinate the Canadian side as we do this feasibility study and feed in information from the Canadian side and essentially take the lead on our end as this study starts to unfold in the state of Michigan.”

Kadri says that drone technology could potentially provide Ontario and Michigan with new ways of facilitating trade and the movement of goods across borders.

“This is a very initial stage in looking into it, so that we can better understand if the opportunity is there and what the opportunities may be,” he said.

Terresky is currently using drones to facilitate all the mapping and surveying Waterfront Toronto’s Port Lands Flood Protection Project, and will use drones to conduct stack inspections with Algoma Steel Inc. beginning next month.

“Shipping stuff across the border, I think it would be great. I think it’s awesome,” said Rizzo. “It’s really good for health care products – blood, especially, is a big one.

“But surveillance, I think, is key for where you guys are.”

The idea of drones delivering goods isn’t a new development – Terresky was part of a 2016 feasibility study regarding Amazon’s plan to establish a warehouse on Toronto’s waterfront and use drones to deliver its goods to locations along Lake Ontario.

Budds says that although similar work has occurred in other states, this joint project between Michigan and Ontario is unique due to the different regulatory frameworks around aviation and border crossings that will come up in discussions with international partners.

“I think there’s a huge opportunity there to look at some of that unique transportation challenge that exists near our border, so we’re excited about that,” he said.